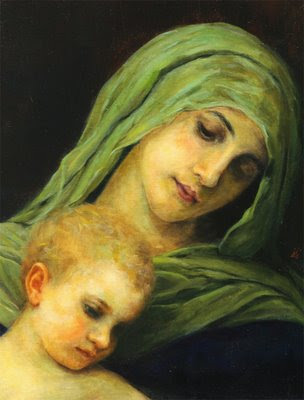 " 'Bouguereau's 'Madonna and Child with St. John' "
oil on linen panel . 14 x 11 . 2004
copyright © kay eneim 2004
nfs
My first completed oil painting.
This is a cropped and adapted version of William Bouguereau's well-known painting depicting Christ extending His hand down to His cousin, St. John the Baptist.
William Adolphe Bouguereau (1823-1905), a French painter, was one of the most prominent painters of his time. His abilities as a Master have been in dispute by some ever since. Some critics claim his figures appear static. I think they are beautiful, none the less.
Posted by kay eneim at 7:00 AM