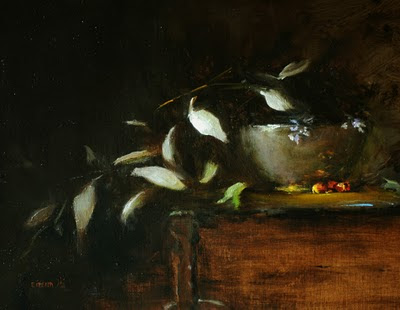 "Seeded Eucalyptus . 11 x 14 . oil on linen panel
© kay eneim
private collection
I love this little silver bowl... a wonderfully handcrafted, simple, stunning little bowl... given to us one year for Christmas.
...it was a joy to paint alongside the flowering eucalyptus!
Posted by kay eneim at 8:00 PM

Our Lady of Knock, Ireland 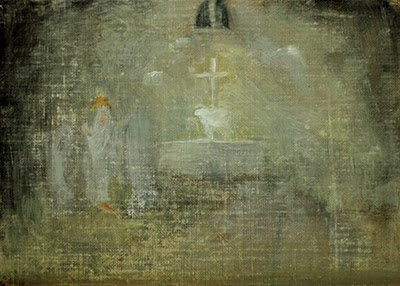 Sketch - "Our Lady of Knock" . 6 x 8 . oil on linen panel
copyright © kay eneim 2011
Perhaps you have heard of the Marian Shrine at Knock, Ireland...
It is the site of an abundance of recorded miracles in the aftermath of the apparition of Our Blessed Mother, with St. Joseph and St. John the Evangelist, alongside Christ in the form of the Sacrificial Lamb on the altar while surrounded by swiftly, quietly flying angels.
It was a scene of silence and light amidst darkness.
For a long time I have had that scene in my head, as it was described by those who saw it on August 21, 1879, and have thought how, as an artist, I would depict that scene accurately yet have it work as an artistic composition.
What is unique about this apparition, a valid and recognized apparition by the Catholic Church, is that it was about the Holy Mass. While some artists have composed their paintings to show the Blessed Mother as the main focus of this apparition, I am working to keep the centrality of the altar as it was conveyed that day in Knock.
Above is a small sketch (very rough, to be sure) in preparation for a somewhat larger canvas... with Our Lady in prayer and humble deference to Christ on the altar. The plan is to keep it very misty, as it was a dark, rainy, windy night... and, at the same time, convey the absolute quiet and bright light that was present at the gable wall outside that little church in Knock where the figures stood...
At the time, Archdeacon Cavanagh was the much-loved pastor of the parish where she appeared that day. Also on that day, he had completed saying his 100th Mass for the Poor Souls of Purgatory.
I believe this is the first and only recognized apparition of Our Lady in which the Eucharist is present on the altar, in the form of the sacrificial Lamb. This apparition is particularly special to the priesthood and to the Holy Mass.
You can read more about the apparition by clicking here.
Posted by kay eneim at 11:00 PM