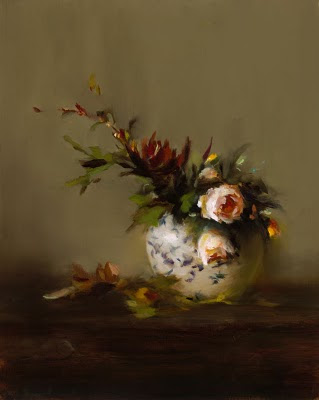 "Lasting Arrangement" . 20 x 16 . linen on panel . 2011
copyright © kay eneim 2011
sold
This particular painting did not come easily... i mean really.
At the time it was begun, my head was in a fog. I was adjusting to a studio move which was far more to 'reckon with' than i had expected... and i was without a garden for inspiration.
In a workshop in April (2010) with Sherrie McGraw, i began this painting with much promise...
but i just couldn't get into the swing of things that week.
I had planned ahead for this workshop and had the last of the roses from a bareroot rose i had planted in a can... just so i could have some roses for Sherrie's workshop.
I loved this arrangement so much... it made the struggle all the more frustrating.
In the end... after getting the unfinished painting home... I decided to scrape down some areas and begin again with some new protea and new roses.
WELL... without a garden the 'new' roses weren't going to happen, either! 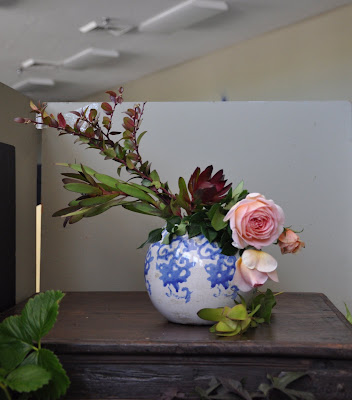 photograph © kay eneim 2010
At least i had this photo from the workshop.
As much as i really dislike working from photos, this photo did help me to work on the painting this week... many months later.
Sooooo... after an injury that kept me away from the easel for eight months, it is at last finished.
... i can't begin to tell you how grateful i am!
Posted by kay eneim at 1:00 AM