Chacon's 'Madonna and Child with Bird' 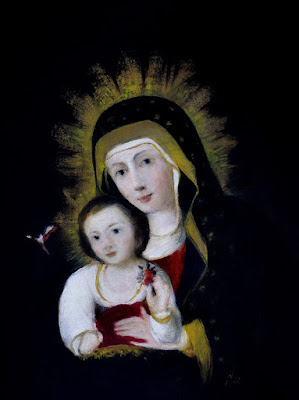 This image was originally painted by Ignacio Chacon around 1765. (His painting was featured on the U.S. postage stamp for Christmas 2006. Michael Osborne cropped and adapted the image to accommodate the postage stamp dimensions.)

It was painted in the style of Cuzco, Peru. Chacon is believed to have worked there as an artist from the years 1745-1775.

To the Incan culture, birds were considered sacred and were thought to have the ability to reach the sun god, thus by including the little bird, the Christ Child was shown to have divine status.

It is also believed that Chacon was influenced by a painting by Bartolomeo Murillo, 'Holy Family of the Little Bird'.
Posted by kay eneim at 11:37 AM