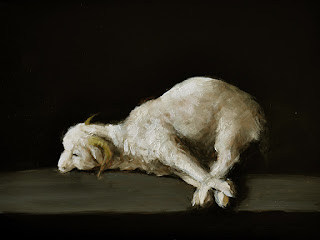 Every year during Lent, I paint an old master's work that focuses on an image related to Christ's Passion.

This little painting is a work in progress of Zurbarán's original work that was 15" x 24" and titled "Agnus Dei". It's dramatic effect has always had an impact on me. I imagine him painting a real lamb laid on an altar-type structure in a dark studio with the natural light directed 'just so'... and consider it his way of explaining Christ's Passion that is both scriptural and allegorical... much like C.S. Lewis' image of the lion in The Lion, the Witch, and the Wardrobe.

Email ThisBlogThis!Share to TwitterShare to FacebookShare to Pinterest
Labels: Agnus Dei; Zurbarán; The Lion, and the Wardrobe, Witch